What constitutes suspicion of KHV Disease?

DEFRA’s definition is: “Dead or dying fish with other clinical evidence such as bleeding from the gills, white patches on the gills or skin, sunken eyes and hyperactive behaviour in fisheries. These signs usually appear when water temperatures are between 15 o and 28 oC”.

However, these clinical signs in part can be associated with many other diseases therefore please do not panic if your Koi exhibits some of these features. Sunken eyes are not unusual with very sick fish which can be due to many causes.

Should anybody wish to read the full details of the Act, please contact us.

In looking at the Act in relation to hobbyist ponds, provided your pond is not connected to, or discharges into, an inland waterway, the spread of infection is assessed as negligible and no further action will be taken.

Should anybody have the slightest concern with regards to the possibility of KHV, please do not hesitate to contact us at any time and talk through any difficulties you may have. In most cases, the problems are likely to lie in other areas and can easily be remedied. We are more than pleased to make a follow up pond visit and if necessary, take samples for viral, bacterial and sensitivity testing. Lets make sure that it’s not some other problem before you contact the Fish Health Inspectorate.

Spread of KHV in Japan

Where does a new virus come from?

How do my Fish get infected with KHV

KHV should be considered if:

Clinical Signs of KHV (Uncertainty is the only certainty)

THESE WILL JUST CAUSE YOU INSOMNIA 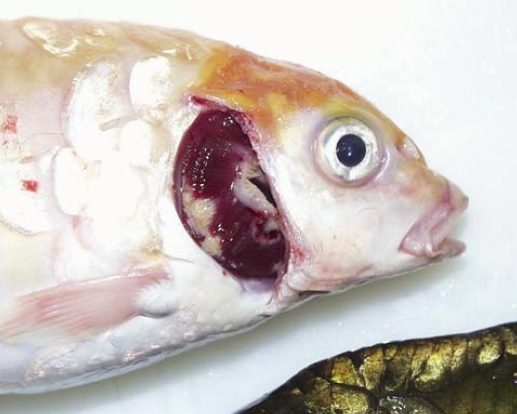 What happens if my Koi have KHV (several options) 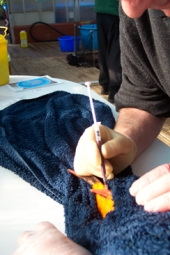 With the development of the ELISA (Enzyme Linked Immunosorbent Assay) test, a small blood sample is taken from live fish, which are anethised first. Koi which have been exposed to KHV or have been vaccinated will carry antibodies which, within a prescribed time frame, can be detected. If positive, the Koi will have the potential to transmit the virus to naive (previously unexposed) Koi and cause a disease outbreak in those fish.

In addition to this ‘standalone test’, there are many other tests available which looks at components in the blood sample and gives us a wider picture on recent exposures to any serious disease. With the advent of the new tests and improvements in intravenous blood sampling techniques, it is possible to test a fish for a virus without the need for culling, which predated methods used. 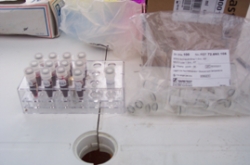 In addition to the virology testing, blood samples can also be used to test the normal physiological functions of the fish and to check toxic exposure in major organs such as the liver and kidneys. Dietary problems such as anaemia are often encountered during periods of poor health and in extreme cases, can be corrected using vitamin deficiency injections. Testing the functions of a fish’s major organs can be of vital importance if toxicity is suspected and there is the need to administer antibiotics. Some antibiotics such as many of those in the Aminoglycides group can put more strain on organs such as the liver, than others. If these organs are already in poor state, from say, toxic exposure, then there is the possibility of failure and mortality if these are used.

In looking at bacteriology, all difficult systemic or ulcerated infections, and those which are having difficulties in healing, were previously sampled on the surface using a carrier swab. This was then sent to the pathology lab for bacteria identification and anti-biotic sensitivity testing. This method has its limitations. As it’s a ‘surface’ swab, you can also be sampling bacteria from the pond environment and not identifying the primary culprit. However, a blood sample can look for ‘deep seated’ internal pathogens which may be causing the infections, and the most effective antibiotic to use can be found more easily.

At Healthy Koi we firmly believe in the advantages of using blood sampling as a diagnostic tool and work to advance this area. As few in the UK undertake blood sampling at the present time, we donate surplus blood samples to the few UK laboratories who conduct viral research and to one which is currently developing a new KHV vaccine.

*Please note that intravenous blood sampling should not be carried out by the hobbyist but only by those with professional experience. Factors such as needle size, volume of blood removed, and the positioning of the needle are critical if you are not to injure your fish or cause unnecessary suffering.*